"They expect the oil to flow within weeks. Coming from two miles underground, the crude should reach the arid plains of Puntland in the north-east corner of Somalia by April.

Around the same time, Somali diplomats say an offensive against al-Shabaab militia in the south of the country, backed by US drone strikes, should have damaged the Islamist group's "effective fighting capability"....

So the real corporate goal may well be not what is due to arrive on the surface next month but what is known to be under the Indian Ocean off Somalia's coast – where sovereignty is unclear.

Drilling in Puntland by the Canadian firm Africa Oil began last month and transitional government officials, in London for David Cameron's conference, said pipelines to the country's ports had been laid....."

Britain leads dash to explore for oil in war-torn Somalia 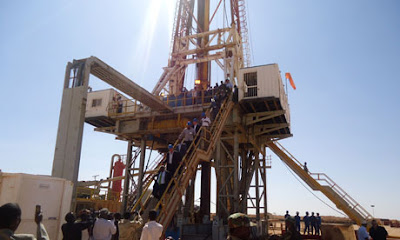 "Britain is involved in a secret high-stakes dash for oil in Somalia, with the government offering humanitarian aid and security assistance in the hope of a stake in the beleaguered country's future energy industry.

Riven by two decades of conflict that have seen the emergence of a dangerous Islamic insurgency, Somalia is routinely described as the world's most comprehensively "failed" state, as well as one of its poorest. Its coastline has become a haven for pirates preying on international shipping in the Indian Ocean.

David Cameron last week hosted an international conference on Somalia, pledging more aid, financial help and measures to tackle terrorism. The summit followed a surprise visit by the foreign secretary, William Hague, to Mogadishu, the Somali capital, where he talked about "the beginnings of an opportunity'' to rebuild the country.

The Observer can reveal that, away from the public focus of last week's summit, talks are going on between British officials and Somali counterparts over exploiting oil reserves that have been explored in the arid north-eastern region of the country. Abdulkadir Abdi Hashi, minister for international cooperation in Puntland, north-east Somalia – where the first oil is expected to be extracted next month – said: "We have spoken to a number of UK officials, some have offered to help us with the future management of oil revenues. They will help us build our capacity to maximise future earnings from the oil industry."...."
Posted by Tony at 5:05 PM