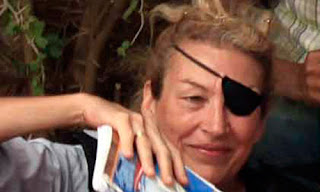 "The veteran Sunday Times correspondent, Marie Colvin and French photographer Remi Ochlik have been killed in the Syrian city of Homs after a shell hit the house in which they were staying.
Two other foreign reporters as well as seven activists from the ravaged Bab al-Amr neighbourhood were also wounded in the deadliest attack on western media since the Syrian uprising began almost one year ago. One of the wounded is the Sunday Times photographer, Paul Conroy, who was travelling with Colvin.

Colvin, a decorated correspondent with more than 30 years of experience in conflict zones, and Ochlik, who last month won a World Press Photo award, died instantly when the artillery shell struck the safe house that had been provided for them by local activists.

The house was located next to a hospital and had been the main refuge for all reporters who had made it to Bab al-Amr in the face of a relentless barrage by regime forces over the past three weeks.

An activist for the campaigning group Avaaz who witnessed the attack on Wednesday morning said: "I left the house after it got struck and headed to a house across the street. The shelling continues and the bodies of the journalists are still on the ground. We can't get them out because of the intensity of the shelling even though we're only a few metres away from them."

Another witness told the Guardian that rockets continued to rain down on the area as the wounded tried to escape the bombed house. A graphic video poster on the internet showed the two-story house in ruins – a scale of damage that could only be caused by a heavy artillery round. Two bodies were visible in the rubble......."
Posted by Tony at 4:36 AM