Asad is Behaving, as the Arabic Expression Goes, Like a Woman Very Much Interested in Sex, But......Afraid of Pregnancy 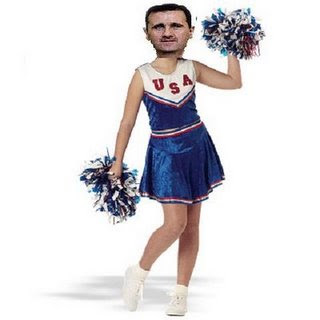 "19/06/2008 Syrian President Bashar al-Assad Thursday ruled out direct talks with Israeli Prime Minister Ehud Olmert on the sidelines of an international summit in Paris next month. Assad and Olmert will be in Paris as guests of French President Nicolas Sarkozy who is to announce the launch of a new Mediterranean Union on July 13.

"This is not like drinking tea," Assad told reporters in New Delhi when asked about the possibility of direct talks between the two. "The meeting between me and the Israeli prime minister will be meaningless without technocrats, who are the experts, laying the foundation," said Assad who is on a four-day state visit to India. "Only sending signals with no real result is meaningless."

His comments follow Israeli President Shimon Peres publicly calling on Syria on Sunday to enter direct talks. Assad had said direct peace talks with Israel were unlikely before 2009 [Assad to Olmert: according to Syrian tradition, sex is not permissible on the first date!] and depended on the fate of Olmert, who has been dogged by calls for his resignation over a graft scandal."
Posted by Tony at 4:31 AM