Messianic Jews say they are persecuted in Israel 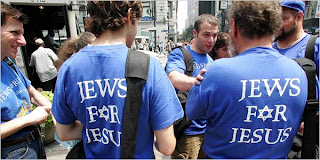 Police say they are still searching for the assailants. But to the Ortiz family the motive of the attackers is clear: The Ortizes are Jews who believe that Jesus was the Messiah.

Israel's tiny community of Messianic Jews, a mixed group of 10,000 people who include the California-based Jews for Jesus, complains of threats, harassment and police indifference.

The March 20 bombing was the worst incident so far. In October, a mysterious fire damaged a Jerusalem church used by Messianic Jews, and last month ultra-Orthodox Jews torched a stack of Christian holy books distributed by missionaries........"
Posted by Tony at 8:27 PM