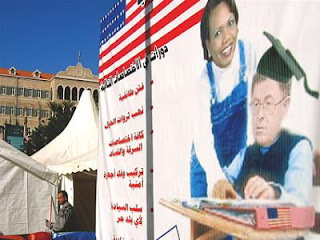 "......It is likely Ms. Rice's last visit to Lebanon, but not her finale to the region which have averaged roughly one appearance every 9 weeks since assuming her current post. Rice, as with the Bush administration generally, remains hugely unpopular here in Lebanon based partly on her callous remarks: " it ( the wanton Israeli killing and bombing) are birth pangs of the new Middle East" , "it's too early for a sustainable ceasefire", "Israel is just exercising its right to self-defense and the United States supports that right", etc . during the 33 day July 2006 War and her work to delay a ceasefire during the fighting which directly contributed to the more than 1,400 Lebanese killed, 4,500 wounded and massive destruction of Lebanon's infrastructure as well as its economy and environment......

The brilliant long term Progressive Socialist leader in contemplating retirement to enjoy his vast ('socialist') land holdings and vineyards above Khalde and Damour. Last week he told his key advisors that he was prepared to resign and turn the PSP over to his son (that's how it works in feudal Lebanon tradition--Primogeniture today! Primogeniture tomorrow! Primogeniture forever! to paraphrase the late Gov. George C. Wallace of Alabama).

When one aid asked Wallid if his depression and wish to resign was the result of the May events (Hezbollah roared up into parts of his Chouf to rattle his cage, with unnecessary loss of life on both sides" one observer noted and apparently it did shake him up. Only yesterday did the Lebanese Army finally vacate his Sweifeit Headquarters turning it back over to the PSP). Jumblatt was candid as reported in Beirut newspapers. "They won. We lost", he was quoted as saying, referring to the 20 month struggle between the US backed majority and the Hezbollah led opposition......

One could hope that the "A Team" recovers from any heartache and bruised feelings as Condi flits back to Stanford after the Bush administration ends its reign of terror in this region........"
Posted by Tony at 4:25 AM