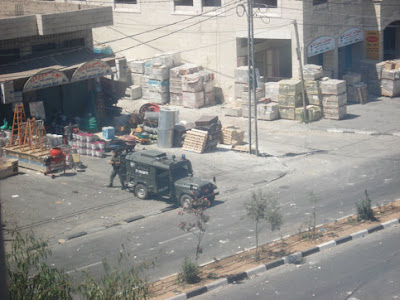 ".......Normally when the IOF comes into Deheisheh to kidnap political prisoners or to keep Palestinians terrorized they do this in the wee hours of the morning, at least when I've been here. I have never seen such an all-out onslaught on Deheisheh, though it has happened many times before.......

What we did not know is that while the battle in Deheisheh was unfolding soldiers had entered the Abu Akar home and destroyed it from the inside out. What I did not realize is that I have a friend in this family. For the family this began when two IOF soldiers came into the Doha area dressed in civilian clothes trying to appear as if they look Palestinian. This is a familiar story for many people here as this is how my friend's aunt's husband was assassinated, along with three other Palestinian men, by Israeli security forces who entered Bethlehem in March. At the time her son was in jail and today he is the young man they were looking for. He was not at home; he escaped. But his family was terrorized. After the plain-clothes Israelis entered the IOF soldiers followed by bombing the front door of the house down. Afterwards they shot hundreds of bullets all around the house -- through the television set, through the wardrobes, turned over the furniture, and then they destroyed the bathroom. My friend's aunt was made to take off all her clothes, she and her niece were beaten by the soldiers. There were many pieces of evidence left behind. Multiple kinds of bullets and grenades with Hebrew writing on them had been collected by the younger children in the family. The house still smelled like gas. The family had been making a big Saturday lunch of chicken and rice; the soldiers took the canister of cooking oil and dumped it all over the bathroom area.

This story ends here for now, but for this family this will not end. There have been threats made that will likely mean a repeat of today."
Posted by Tony at 4:07 AM