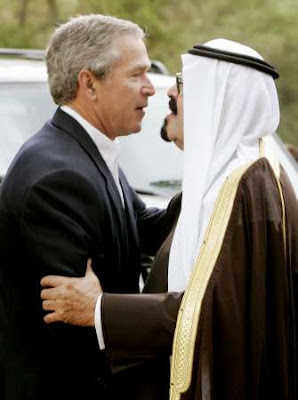 ANYTHING FOR YOU SWEETHEART!

"Saudi Arabia will raise oil production to record levels within weeks in an attempt to avert an escalation of social and political unrest around the world. King Abdullah signalled the commitment to the UN secretary general, Ban Ki-moon, at the weekend after the impact of skyrocketing oil prices on food sparked protests and riots from Spain to South Korea.

Next month, the Saudis will be pumping an extra half-a-million barrels of oil a day compared to last month, bringing total Saudi production to 9.7 million barrels a day, their highest ever level. But the world's biggest oil exporters are coupling the increase with an appeal to western Europe to cut fuel taxes to lower the price of petrol to consumers........"
Posted by Tony at 4:40 AM