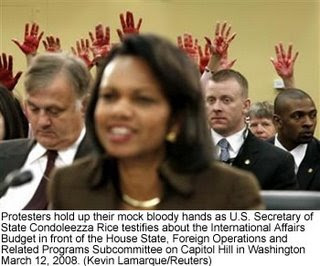 "16/06/2008 US Secretary of State Condoleezza Rice made an unannounced visit to Lebanon on Monday under tight security, as the country is in the process of forming a national unity government.

"I am looking forward to going to Lebanon to meet with the president and to talk with various Lebanese officials," Rice told
reporters on her way to Beirut from Tel Aviv. "But I am also going to express the United States support for Lebanese democracy, for Lebanese sovereignty."
She said her visit was also aimed at discussing "how the United States can support the institutions of a free Lebanon including the work that we do to support the armed forces, to support the Lebanese economy and the Lebanese civil society."