HITLER YOUTH IN THE WEST BANK 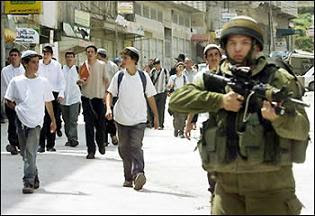 "Last week, the Israeli human rights organization B’Tselem released video clips showing masked Jewish settlers ganging up on and severely beating elderly Palestinian peasants near the town of Yatta, southwest of Hebron. At least three Palestinians were wounded in the unprovoked assault, including a man and his wife, both in their early sixties.

The latest act of settler terror was not an isolated incident, as official Israeli spokespersons would often claim. It represents a disturbing and persistent phenomenon as young and usually heavily armed settlers continue to attack Palestinian farmers, peasants and shepherds and vandalize their property in an effort to drive them away from their lands and villages.

We who live in the West Bank know too well what it means to live next to a Jewish settlement. It means constant harassment, unending vandalism and perpetual terrorism, both psychological and physical......."
Posted by Tony at 6:46 AM