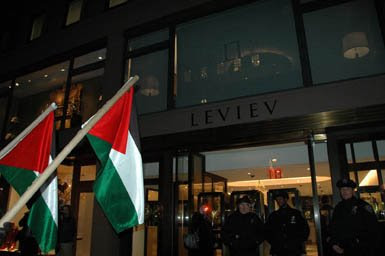 "The UN children's fund UNICEF has severed ties with an Israeli billionaire and financial backer due to his suspected involvement in building settlements in the West Bank, UNICEF said on Friday.

Lev Leviev, a real estate and diamond mogul who is one of the richest men in Israel, has supported UNICEF with direct contributions and indirectly by sponsoring at least one UNICEF fund-raiser.

He is chairman of Africa Israel Investments, a conglomerate whose units include Danya Cebus, which the Arab rights advocacy group Adalah-NY charges has carried out settlement construction, considered illegal by the United Nations.

UNICEF decided to review its relationship with Leviev after a campaign by Adalah-NY and found "at least a reasonable grounds for suspecting" that Leviev companies were building settlements in Palestinian territory, a UNICEF official said.

"I can confirm that UNICEF has advised Adalah in New York that it will not be entering into any partnerships or accepting financial contributions from Lev Leviev or his corporate people," Chris de Bono, a senior adviser to the executive director of UNICEF, told Reuters.

"We are aware of the controversy surrounding Mr. Leviev because of his reported involvement in construction work in the occupied Palestinian territory," de Bono said, adding that it was UNICEF's policy to have partners who were "as non-controversial as possible."......"

Comment: This is a major accomplishment for Adalah-NY which has been waging a determined campaign to expose Leviev and his criminal activities in occupied Palestine and in Africa. I salute Adalah-NY and all of those who supported this campaign, including Professor Norman Finkelstein. In this success, I think there is a lesson for Palestinian supporters and human rights activists.
Posted by Tony at 5:42 AM