Leaked Manual: How to train death squads and quash revolutions from San Salvador to Iraq 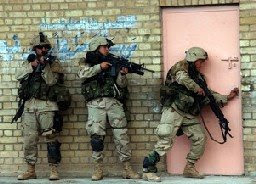 "Wikileaks has released a sensitive 219 page US military counterinsurgency manual. The manual, Foreign Internal Defense Tactics Techniques and Procedures for Special Forces (1994, 2004), may be critically described as "what we learned about running death squads and propping up corrupt government in Latin America and how to apply it to other places". Its contents are both history defining for Latin America and, given the continued role of US Special Forces in the suppression of insurgencies, including in Iraq and Afghanistan, history making.

The leaked manual, which has been verified with military sources, is the official US Special Forces doctrine for Foreign Internal Defense or FID.

FID operations are designed to prop up "friendly" governments facing popular revolution or guerilla insurgency. FID interventions are often covert or quasi-covert due to the unpopular nature of the governments being supported ("In formulating a realistic policy for the use of advisors, the commander must carefully gauge the psychological climate of the HN [Host Nation] and the United States.")

The manual directly advocates training paramilitaries, pervasive surveillance, censorship, press control and restrictions on labor unions & political parties. It directly advocates warrantless searches, detainment without charge and (under varying circumstances) the suspension of habeas corpus. It directly advocates employing terrorists or prosecuting individuals for terrorism who are not terrorists, running false flag operations and concealing human rights abuses from journalists. And it repeatedly advocates the use of subterfuge and "psychological operations" (propaganda) to make these and other "population & resource control" measures more palatable.

The content has been particularly informed by the long United States involvement in El Salvador........"
Posted by Tony at 8:27 PM