Syria: Peace with Israel will be 'bliss' 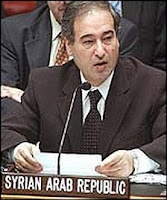 "A senior Syrian official has expressed confidence regarding the possibility that indirect peace talks with Israel will come to fruition, saying that a peace agreement would be a source of "bliss" in the Middle East.

"When people can move freely between Syria, Israel, Palestine, Jordan and Egypt, a great change will take place," Syrian Deputy Foreign Minister Faisal al-Miqdad told the Chicago Tribune. "Our people will enjoy life without bad dreams of the martyrdom of their children, we will improve living conditions and we will open up to the international community."

"The impact of peace will be bliss for the entire region," he added.

Syria, Miqdad claimed, was aware that there could be no direct talks with Israel without the involvement of the US........"
Posted by Tony at 5:28 AM