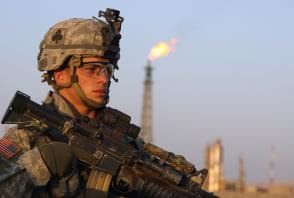 "Nearly four decades after the four biggest Western oil companies were expelled from Iraq by Saddam Hussein, they are negotiating their return. By the end of the month, Royal Dutch Shell, BP, Exxon Mobil and Total will sign agreements with the Baghdad government, Iraq's first with big Western oil firms since the US-led invasion in
2003.......

Big four have history of control

For the four oil giants, the new agreements will bring them back to a country where they have a long history. BP, Exxon Mobil, Total and Shell were co-owners of a British, American and French consortium that kept Iraq's oil reserves in foreign control for more than 40 years.

The company was formalised in 1928 and each of the four shareholders had a 23.75 per cent share of all the oil produced. The final 5 per cent went to Calouste Gulbenkian, an Armenian businessman.

In 1931, an agreement was signed with Iraq, giving the company complete control over the oil fields of Mosul in return for annual royalties. After Saddam's coup in 1958, nationalisation came in 1972."
Posted by Tony at 5:11 AM