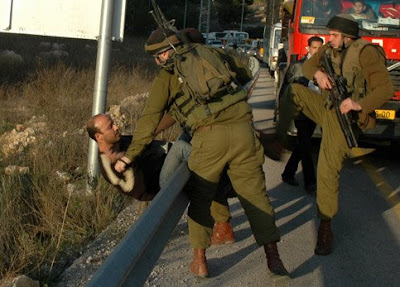 A marketing campaign to rebrand an Israeli army unit notorious for its role in the West Bank? Talk about doomed to failure

".....If only reality would replicate this charming, dummy street-life. For, as Haaretz points out, the Kfir Brigade – permanently posted in the West Bank – is the army unit responsible for most of the crimes and violations perpetrated against the Palestinians last year.....

Only someone embedded in a dense fog of denial could presume that a gimmicky recruitment trick could reverse the Kfir Brigade's negative press. If the unit has a bad image, that's because it is a bad brigade; because its patrol is shown to be guilty of carelessness, cruelty and violence; because its terrifying night raids are the reason West Bank Palestinians call their own PA law-enforcers the "pyjama police" – disappearing at bedtime to be replaced with IDF heavies.
Kfir Brigade's own former members describe its role in enforcing the Israeli occupation as having turned them into "monsters". This brigade is the nightmare of bed-wetting Palestinian children and its deeds should be the nightmare of any Israeli who seeks peace, rather than perpetual loathing, between the Jewish and Palestinian peoples of the region......"
Posted by Tony at 3:28 AM