Running the Distance for Palestine 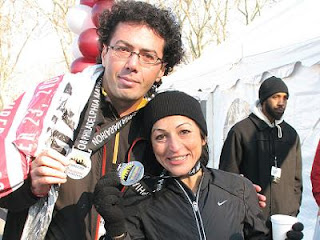 "......When Susan arrived to a devastated scene following the Jenin massacre in April 2002, one thing struck her most: the children; their friendly, loving faces, giddy and full of laughter. She organized a workshop for the camps’ kids as the grown ups busily dug mass graves to bury their friends and family.

Ramzy grew up in a refugee camp in Gaza. He would eagerly await the withdrawal of Israeli tanks from his camp, so that, he, along with many peers could dash to a leveled field of dirt and kick and a soccer ball around till dark or the next Israeli raid, whichever came first.

It’s these memories and more that made running 26.2 miles possible.

In the West Bank, in Gaza or in South Lebanon, Palestinians have learned the virtue of running: resilient West Bank farmers are habitually chased away from their farms to make way for a new Israeli settlement, or room for the Israeli wall; Palestinian mothers in Nahr al-Bared flee with their children to escape the whiz of bullets and the whistles of bombs; Gazan children chasing after a UN aid truck......."
Posted by Tony at 3:29 AM