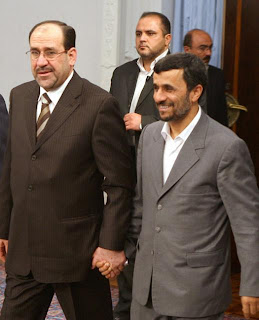 The National, UAE
Via Uruknet.info

Iran’s foreign ministry spokesman, Hasan Qashqavi, said yesterday that Tehran would back the controversial accord, which was passed by the Iraqi parliament last Thursday, provided it is approved by the Iraqi people in a referendum scheduled for July 30......

"Iran’s support of the agreement signals its willingness to be helpful to the US, granted a different US approach to Iran," said Trita Parsi, the president of the National Iranian American Council, which promotes diplomacy to resolve disputes. "Though there is a limit to how much Iran could work against the agreement since its allies in the Iraqi government favoured it, Tehran’s turnaround is still noteworthy," Dr Parsi said in an interview.

Mr Obama’s election also spurred Iran to backpedal on its hostile stance towards Sofa. Those urging improved relations in both Tehran and Washington argue the two countries have vital shared strategic interests, not only in Iraq’s stability but also in Afghanistan’s. Iran is as alarmed by the growing strength of the virulently anti-Shiite Taliban as is the United States.

Mr Ahmadinejad made clear he viewed Mr Obama’s election as an opportunity to mend ties with Washington after years of soaring tension during the presidency of George W Bush....

There was clearly heated behind-the-scenes wrangling in Tehran over Sofa. Ayatollah Ali Jannati, a prominent cleric who heads Iran’s influential Guardian Council, had opposed the accord until last week when he performed a rare U-turn at Friday prayers, giving Sofa his lukewarm but important approval. The Iraqi parliament had approved the deal under US pressure but "did well" in deciding to put it to a referendum, he told worshippers during a sermon. "Then the ball will be in the court of the Americans who claim that they are after democracy," he said.

More effusive was the head of Iran’s judiciary, Ayatollah Hashemi Shahroudi, who is a close ally of Iran’s Supreme Leader, Ayatollah Ali Khamenei. He said the Maliki government in Baghdad had "acted very wisely" in its handling of the deal."
Posted by Tony at 4:49 PM