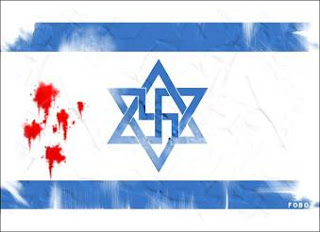 By Jonathan Cook
The National, UAE

"NAZARETH // Extremist settler groups involved in violent confrontations with Palestinians in the centre of Hebron have chosen their next battleground, this time outside the West Bank.

A far-right group know as the Jewish National Front, closely associated with the Hebron settlers, is preparing to march through one of the main Arab towns in northern Israel. The march, approved by the Supreme Court in October, is scheduled to take place on Dec 15, the group announced this week.......

The Front said it will wave Israeli flags in what the group has dubbed a demonstration of “Jewish Pride” through Umm al Fahm, home to nearly 45,000 Palestinian citizens of Israel.

The Front’s main platform is the expulsion of all Palestinians from what it calls “Greater Israel”, which also includes the West Bank and Gaza. It skates close to illegality with veiled suggestions that Palestinian citizens of Israel should also be ethnically cleansed.

“We will march through Umm al Fahm with flags to send everyone a message that the land of Israel belongs to us,” said Baruch Marzel, the Front’s leader.

The move has aroused opposition from local residents and the leadership of the Palestinian minority. Jamal Zahalka, an Arab member of parliament, called the court decision a “legitimisation of racism”. “We will use our right of protest and defend Umm al Fahm from these fascists and racists.”........."
Posted by Tony at 6:08 AM