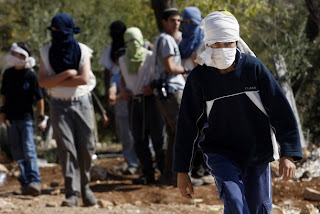 Not only do they serve long and tiring hours in the reserve forces, and not only are they forced to deal with violent clashes with settlers, but now, Border Guard officers of Ethiopian descent are also faced with rising racism.

"Niggers don't expel Jews! This isn't what we brought you to Israel for!" are just some of the degrading slurs Border Guard officers reported hearing from masked settlers...."
Posted by Tony at 3:37 AM