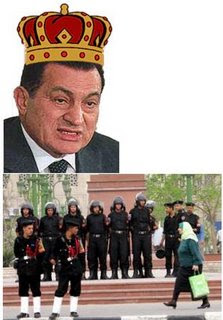 "A leading Egyptian human rights group said Friday that human rights in the Arab world have deteriorated over the past year and the future looks bleak for reform.

The Cairo Institute for Human Rights Studies, one of the oldest such groups in the Arab world, accused Arab governments in its annual report of attempting to silence rights organizations at home and abroad.

The report, which was released Friday, chronicled the human rights records of 12 Arab countries in the Middle East, where the group says sectarian tensions are on the rise, judicial systems lack independence and power-sharing mechanisms are largely absent.

The group singled out Egypt, accusing the country of using its influence in various international organizations, such as the United Nations, to thwart human rights reform. It also criticized the Arab League, an umbrella group of 22 Arab states, for supporting repressive regimes like the ones in Sudan and Yemen.

"The Arab League has become more expressive of authoritarian tendencies than any time in the past," the report said.

Officials from Egypt and the Arab League could not be reached for comment because Friday is the weekend in the Mideast.

The rights group said Islamic extremists are no longer the principal targets of Arab government repression. Instead the report said there is an increase in repression of reformists, human rights defenders and independent press. "
Posted by Tony at 7:26 AM