India's 9/11. Who was Behind the Mumbai Attacks? 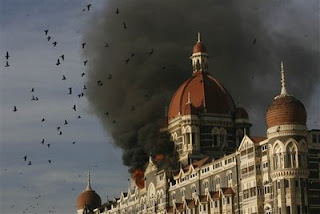 "The Mumbai terror attacks were part of a carefully planned and coordinated operation involving several teams of experienced and trained gunmen.

The operation has the fingerprints of a paramilitary-intelligence operation....

Who was Behind the Attacks?

In chorus, both the Western and Indian media are pointing fingers at Pakistan and its alleged support of Islamic terrorist organizations....

In Europe and North America, the Mumbai attacks by Islamic fundamentalists are perceived as part of the "Clash of Civilizations". "Militant Islam is involved in a war against civilization".....

According to the media, the enemy is Al Qaeda, the illusory "outside enemy " which has its operational bases in the tribal areas and North West Frontier Province of Pakistan. Washington's self-proclaimed holy mandate under the "Global War on Terrorism" is to take out bin Laden and extirpate Islamic fundamentalism.

America's right to intervene militarily inside Pakistan in violation of Pakistan's sovereignty is therefore upheld. Bombing villages in the tribal areas of North West Pakistan is part of a "humanitarian endeavor", in response to the loss of life resulting from the Mumbai attacks.....

US network TV has extensively covered the dramatic events in Mumbai. The attacks have served to trigger an atmosphere of fear and intimidation across America.

The Mumbai attacks are said to be intimately related to 9/11. Official US statements and media reports have described the Mumbai attacks as part of a broader process, including the possibility of an Al Qaeda sponsored terrorist attack on US soil.....

It just so happens that one day before the Mumbai attacks, "the FBI and the Department of Homeland Security (DHS) had warned that there is a 'possible but uncorroborated' Al -Qaeda threat against the New York transportation system." (Ibid)....

The media reports point, in chorus, to the involvement of Pakistan's Military Intelligence, the Inter Services Intelligence (ISI), without mentioning that the ISI invariably operates in close liaison with the CIA.

The US media indelibly serves the interests of the US intelligence apparatus. The implications of these distorted reports are that:

1. The terrorists are linked to Al Qaeda. The Mumbai attacks are a "State sponsored" operation involving Pakistan's ISI

3. The continued bombing of the tribal areas by the US Air Force in violation of Pakistan's' sovereignty is consequently justified as part of the "Global War on Terrorism".

The ISI is America's Trojan Horse, a de facto proxy of the CIA. Pakistani Intelligence has, since the early 1980s, worked in close liaison with its US and British intelligence counterparts.

Were the ISI to have been involved in a major covert operation directed against India, the CIA would have prior knowledge regarding the precise nature and timing of the operation. The ISI does not act without the consent of its US intelligence counterpart.....

Historically, the CIA has played an unofficial role in the appointment of the director of Pakistan's Inter Services Intelligence (ISI).

In September, Washington pressured Islamabad, using the "war on terrorism" as a pretext to fire the ISI chief Lieutenant General Nadeem Taj.....

President Asif Ali Zardari had meetings in New York in late September with CIA Director Michael Hayden. (The Australian, September 29, 2008), Barely a few days later, a new US approved ISI chief Lieutenant General Ahmed Shuja Pasha was appointed by the Chief of the Army, General Kayani, on behalf of Washington.....

The US is currently violating Pakistan territorial sovereignty through the routine bombing of villages in the tribal areas and the North West Frontier Province. These operations are carried out using the "war on terrorism" as a pretext. While the Pakistani government has "officially" accused the US of waging aerial bombardments on its territory, Pakistan's military has "unofficially" endorsed the air strikes.

In this regard, the timely appointment of Lt. General Ahmed Shuja Pasha to the helm of the ISI was intended to ensure continuity in US "counter-terrorism" operations in Pakistan.....

What interests are served by these attacks?

Washington is intent on using the Mumbai attacks to:

1) Foster divisions between Pakistan and India and shunt the process of bilateral cooperation and trade between the two countries;

3) Justify US military actions inside Pakistan including the killing of civilians in violation of the country's territorial sovereignty;

4) Provide a justification for extending the US led "war on terrorism" into the Indian sub-continent and South East Asia.

In 2006, the Pentagon had warned that "another [major 9/11 type terrorist] attack could create both a justification and an opportunity that is lacking today to retaliate against some known targets" (Statement by Pentagon official, leaked to the Washington Post, 23 April 2006). In the current context, the Mumbai attacks are considered "a justification" to go after "known targets" in the tribal areas of North Western Pakistan......

The Mumbai attacks have already created an extremely tense situation, which largely serves US geopolitical interests in the region....

US Interference in the Conduct of the Indian Police Investigation

Also of significance is Washington's outright interference in the conduct of the Indian police investigation. The Times of India points to an "unprecedented intelligence cooperation involving investigating agencies and spy outfits of India, United States, United Kingdom and Israel."

Both the FBI and Britain's Secret Service MI6 have liaison offices in Delhi..... "
Posted by Tony at 6:23 AM