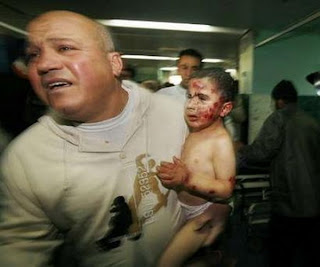 The noble spirit of the universal declaration of human rights is betrayed by a lack of help for Gaza
A Very Good Comment
Karen AbuZayd
(the commissioner general of the United Nations Relief and Works Agency unrwa.org)
The Guardian, Friday December 5 2008

"As we approach the 60th anniversary of the Universal Declaration of Human Rights, the steadily rising death toll in Gaza highlights the painful gap between its peaceful rhetoric and the desperate reality for Palestinian people.
The declaration was a pivotal statement in which the world community recognised the "inherent dignity and the equal and inalienable rights of all members of the human family as the foundation of freedom, justice and peace in the world". True to its nobility of spirit, it declares "the advent of a world in which human beings shall enjoy freedom from fear and want as the highest aspiration of the common people".
Sixty years on, the fate of the Palestinian people should be a cause for universal soul-searching. The need to give substantive meaning to the protection of Palestinians has never been greater. The former high commissioner for human rights, Mary Robinson has said that in Gaza, nothing short of a "civilisation" is being destroyed. Desmond Tutu has called it "an abomination". The humanitarian coordinator for the occupied Palestinian territory, Maxwell Gaylard, said that in Gaza there was a "massive assault" on human rights. Most recently, the European commissioner, Louis Michel, described the blockade of Gaza as a "form of collective punishment against Palestinian civilians, which is a violation of international humanitarian law".........
The right to freedom of movement enshrined in article 13 of the universal declaration also remains a distant hope for many Palestinians. The inhumane blockade of Gaza - which, as many senior UN officials have said, collectively punishes 1.5 million people - and over 600 physical obstacles to movement in the West Bank are a sad reminder of the world community's failure to stand by that article.
With an estimated 10,000 Palestinians in Israeli prisons, including some 325 children, the declaration that "everyone has the right to liberty and security of person" and that no one shall be subjected to cruel, inhuman or degrading treatment has a sad resonance today........"
Posted by Tony at 2:28 AM