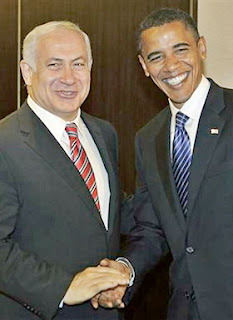 "There is no doubt US President-elect Barack Obama could work well with Likud head Binyamin Netanyahu, should the latter become Israel's next prime minister, Congressman Robert Wexler, one of Obama's most prominent early supporters in the Jewish community, told The Jerusalem Post Wednesday.
Prefacing his comments with the caveat that he did not want to meddle in Israeli politics, and that it was up to Israelis to pick their leader, Wexler said, "I know that Obama and Netanyahu have met on at least two occasions. I was with Barack when he met with Netanyahu at National Airport in Washington a year-and-a-half ago.
"I am confident that should he become the prime minister, Bibi Netanyahu would get along very well with Barack Obama, and the two of them would work in concert toward the achievement of mutual interests. I have no doubt about that."........"
Posted by Tony at 3:42 AM