Rottweilers on the loose 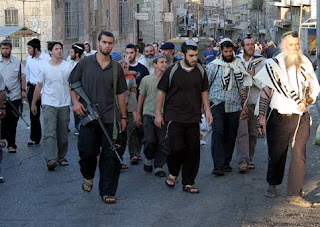 Amid rioting by settlers in Hebron, relatives of two Mumbai victims are pouring fuel on the already-raging fire

"The faux-outrage of the Israeli authorities and the national media in the wake of the Hebron uprising smacks of the outpourings of bemusement in the Rocket Pub in 2006, after the family's Rottweilers mauled the owners' baby granddaughter to death. The settler monster created by the governmental Dr Frankenstein is hardly behaving out of character: give them enough rope and they'll hang whoever's in sight, as countless commentators and critics of Israeli policy have warned time and again for decades.
Religious fervour, combined with an unstoppably virulent strain of nationalism, is a heady cocktail in any situation; when mixed together in the tinderbox atmosphere of a city like Hebron, it was always bound to boil over into the type of situation in which the area finds itself mired today. Hundreds of rampaging settlers and their supporters have erupted in fury at plans to evict the cynically-named "House of Peace" – a disputed building in the heart of the city packed full of settlers defying court orders to evacuate the premises......"
Posted by Tony at 2:32 AM