"We are slowly dying" 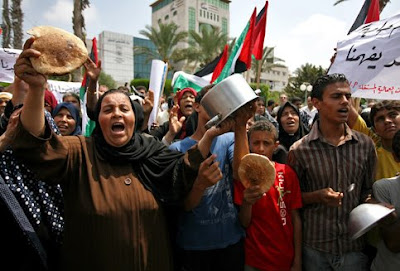 Sameh A. Habeeb writing from the occupied Gaza Strip, Live from Palestine, 3 December 2008

"Israel has further tightened the screw on Gaza, where some areas have been completely plunged into darkness as fuel shortages shut down Gaza's sole power plant 25 days ago.

The power cuts affect all activities dependent on electrical power as the remaining power sources provided by Israel and Egypt cannot serve the needs of the whole of the Gaza Strip. Access to drinking and irrigation water is affected, as well as sewage treatment, risking disease. Already, this means that millions of liters of sewage water pollute the Mediterranean Sea on a daily basis.

Israel is also denying food to the 1.5 million Palestinians in the Gaza Strip. According to the Popular Committee Against the Siege, basic food items like milk, flour, cooking oil, meat, rice and legumes are not sufficiently available. Some figures indicate that only 15 percent of Gaza's food needs are getting in through the Israeli-controlled borders......"
Posted by Tony at 4:05 AM