Arabs in the International Balance 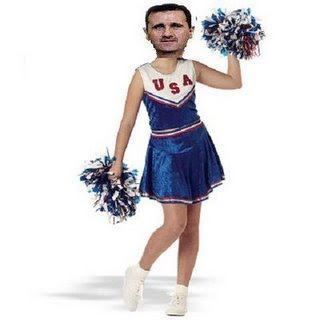 The Means of Power

"......We see UN organizations and investigation commissions confirm Israel’s racism and crimes against Palestinians and Arabs, while the official Arab system is submissive or asleep, effective only in stirring disunity and fragmentation. The Farouq Husni experience can be added to numerous incidents through which the West has proven that it looks at the Arabs as Arabs, with no difference between moderate or non-compliant, and regardless of the country they come from or the sect they belong to. They are all descendants of Prophet Mohammad, slotted into the same category designed for them by Zionism and its allies. When will these Arabs, who suspect and accuse their brothers in order to curry favor with the West, see themselves under the same light and in the same way in order to gain respect for themselves. [COMMENT:

A good question Bouthaina! How about asking your boss, El Presidente Assad for an answer?

Why did Assad, the father, participate with US forces in the attacks on Iraqi forces in 1991? Was that really to help "liberate" Kuwait? Was it not to establish Syria's "moderate" credentials and acceptance by the Empire?

Why did Syrian forces besiege and shell Palestinian refugee camps in Lebanon, and ally themselves with the Fascist Phalange? Was that not with a green light from Uncle Sam?

How about torturing Maher 'Arrar after he was renditioned by the CIA from New York to Damascus? Was that not to curry favor with the Empire?

How about sharing intelligence with the CIA and working hand-in-hand with US occupation forces in Iraq to prevent resistance fighters from entering Iraq? Has the occupation returned that favor? And how? By giving Israel the green light to attack and destroy Syrian installations, while the Rabbit stayed quiet?

Bouthaina, I can go on and on, but please enough of your hypocrisy and doublespeak; we know the regime you represent and speak for. Those who live in glass houses should not throw rocks.] Only then will they win international positions and the international respect they seek. "
Posted by Tony at 8:03 PM