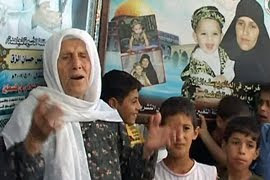 "Some 19 female Palestinian prisoners have been released from an Israeli prison in return for a videotape of a soldier captured by Gaza fighters in June 2006.

A twentieth woman prisoner will be released, probably next week, the office of Binyamin Netanyahu, the Israeli prime minister, has said.

Al Jazeera's Nour Odeh, reporting from the occupied West Bank, said those freed on Friday were handed over to the Red Cross after their release from the Hasharon prison.

Eighteen of these prisoners were released to the West Bank, and the other, Fatima al-Zeeq with her 18-month old baby, was returned to Gaza.

Israel said that while the women were jailed for security-related offences, they were not directly involved in killing Israelis and were all within two years of the end of their prison sentences......"
Posted by Tony at 3:29 AM