Gaza Peace Protester is Prisoner in Own Home 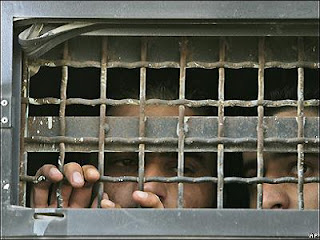 "Nine months after he helped to organise protests against Israel's attack on Gaza, Samih Jabareen is a prisoner in his home in Jaffa, near Tel Aviv, an electronic bracelet around his ankle to alert the police should he step outside his front door.

The 40-year-old actor and theatre director is one of dozens of Arab political activists in Israel who have faced long-term detention during and since Israel's winter assault on Gaza in what human rights groups are calling political intimidation and repression of free speech by the Israeli police and courts.

A report published last week by Adalah, an Arab legal rights group in Israel, said 830 Israeli demonstrators, the overwhelming majority of them Arab citizens, were arrested for participating in mostly peaceful demonstrations during the 23 days of the Gaza operation.......

This month's report by the UN inquiry into Gaza, led by Judge Richard Goldstone, dedicated a chapter to events inside Israel, concluding similarly that there was wide-scale repression of political activists, non-governmental organisations and journalists in Israel.

The goal, the committee said, was "to minimise public scrutiny of [Israel's] conduct both during its military operations in Gaza and the consequences that these operations have had for the residents of Gaza".

The Arab minority is staging a general strike on Thursday to protest the increasingly harsh climate and to mark the failure to prosecute any of the policemen responsible for the 13 deaths in 2000."
Posted by Tony at 4:02 AM