The Incompetent Summoned by the Pharaoh. What is the Point of this Stupid Charade? Who is Using Whom? 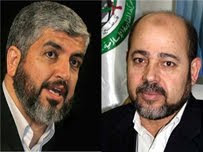 "GAZA, (PIC)-- Hamas spokesman Fawzi Barhoum stated that the visit of Khaled Mishaal, the head of Hamas political bureau, to Cairo on Sunday is intended for discussing the points mentioned in the Egyptian overture to end the inter-Palestinian division.

In a press statement to the Palestinian information center (PIC), spokesman Barhoum said that his Movement’s response would consider the interests of the Palestinian people so as to preserve the democratic gains and the national rights and constants [Say what??]......."
Posted by Tony at 5:24 AM