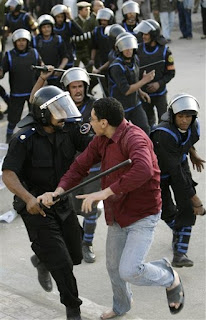 "CAIRO, Oct 2 (IPS) - Egyptians critical of their government are using new media and the Internet to expose its improprieties and press for social change.

Twitter users in Egypt have provided minute-by-minute coverage of labour strikes, while Facebook groups are rallying opposition against the ruling party and its policies. But perhaps the most striking example of new media activism are the dozens of videos of police brutality - many filmed using mobile phone cameras - that have been uploaded to blogs and YouTube.

"The Internet has created a new type of activism," says blogger Sherif Abdel Aziz. "It took the political voice from activists and gave it to the average citizen."

Internet use is growing rapidly in Egypt as connection costs fall. More than 12 million Egyptians, about 15 percent of the population, are logging on regularly. And in doing so, they are being exposed to a flood of news and views outside the sphere of the state-dominated press......."
Posted by Tony at 8:39 AM