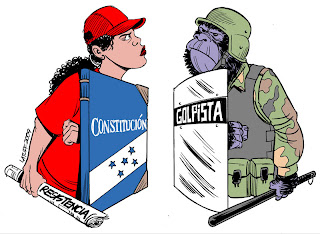 "The Honduran coup regime has been forced to reverse a harsh crackdown on civil liberties amidst growing protests for the restoration of the ousted President Manuel Zelaya. But Honduran forces still blocked a large protest march and shut down two media outlets that have criticized the coup regime.
Meanwhile a top US diplomat criticized the coup regime’s decision but then turned around to issue a harsh condemnation of ousted Zelaya. We go to Honduras to speak with Andres Contreras from inside the embassy where Zelaya is hiding and speak to Luther Castillo, a Honduran doctor who is in Washington to speak with U.S. lawmakers......."
Posted by Tony at 7:04 AM