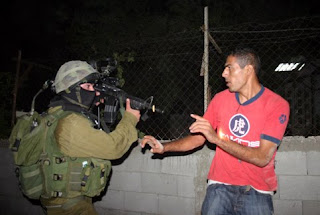 "For the last three months, residents of the West Bank village of Bilin have been subjected to constant night raids by the Israeli military. The raids are in retaliation for their five-year campaign of nonviolent resistance against Israel's wall, which is being constructed on the village's land. The Israeli authorities have arrested members of the Bilin Popular Committee as well as teenagers and young boys from the village in order to obtain forced confessions against committee members. The home of Abdullah Abu Rahme, the Bilin Popular Committee's Media Coordinator, was raided on 16 September 2009. The following is his account of the raid as told to The Electronic Intifada contributor Jody McIntyre........"

"....I haven't done anything wrong, but they want to arrest me because I am a nonviolent activist. Israel does not want our model of nonviolent resistance to spread, and this is one of the ways they are trying to crush us in Bilin -- by invading the village and attacking our homes. But until we remove the wall and settlements from our land, our struggle will continue." -- Abdullah Abu Rahme is Media Coordinator of the Bilin Popular Committee.
Posted by Tony at 6:34 AM