PA's conflicting approaches as different as night and day 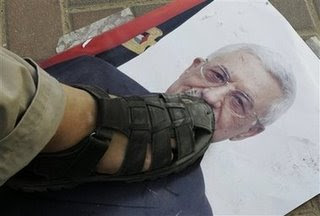 "The Palestinian Authority's actions and rhetoric, especially in the past few weeks and months, show that hypocrisy has become a major component of its official policy.

During the day, the Palestinian Authority acts and speaks as if its leaders had never signed a peace treaty with Israel. During the day, Israel is the enemy that continues to deny the Palestinians their rights, seize their lands, arrest and kill their innocents, and expand existing settlements.

But during the night, the Palestinian Authority changes its colors and speaks and acts in a completely different manner. During the night, the Israeli enemy becomes a friend and peace partner with whom it's legitimate to conduct security coordination and eat in fancy restaurants....."
Posted by Tony at 6:33 AM