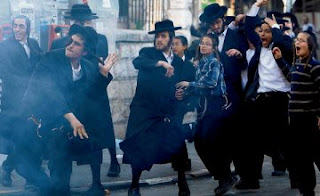 When the police lend support to vigilante groups hounding Jewish-Arab couples, what hope is there for coexistence?

"Whilst the proliferation of ultra-orthodox "vigilante police" is a stain on Israeli society, their Taliban-esque actions can at least be contextualised as the inevitable consequence of religious fundamentalism gone wild. Such communities are dominated by leaders who refuse to accommodate any form of modernisation or freedom of thought into their archaic systems of governance, and the emergence of "modesty squads" [COMMENT: They should hold joint workshops with Hamas to share experiences and learn techniques.] is simply a manifestation of such primitive and patriarchal thinking......

Many Jews in Israel and the diaspora frown upon the idea of their children marrying out of the flock, some even going as far as cutting their children out of their wills and mourning them as though they had died should they take a non-Jewish partner for a spouse. While this is by no means restricted to the Jewish faith, the idea of such proscriptions being incorporated at state level – whether against Jews, Muslims or any other category of "undesirables" – is racism reminiscent of the dark days of segregationist America and pre-enlightened European states.

This week, the Times carried an illustrative and disturbing feature on the Israeli phenomenon, demonstrating the unabashed bigotry of those behind the purity patrols:

[David's] group, which works with police, goes by several names, including Fire for Judaism, is composed of up to 45 men and funded by private donations. Members say they are fighting a 'growing epidemic' of Arab-Jewish dating and spend as many hours as they can on patrol. Similar groups have formed across the country ........

Whatever the more blinkered supporters of Israel's sectarianism say, day after day more evidence piles up attesting to the shocking reality behind Israel's mask of being a tolerant, equitable and democratic "country of all its citizens". The likes of the modesty patrols and the anti-miscegenation squads belong in the furthest recesses of history, yet apparently the Israeli authorities are not only happy to tolerate their presence, but to actively support their work as well.

Were the shoe to be on the other foot, with Jews singled out for such base racial discrimination, the same people supporting such behaviour now against Arabs would rightly be up in arms and demanding justice in the name of the persecuted. But, of course, this is Israel, and therefore somehow "different" and "unique" – the standard retorts of those unable to defend Israeli crimes with any semblance of rational debate. And while they continue banging their drums to drown out any criticism of the Israeli state, at ground level the divisive and destructive behaviour continues, and another nail is driven into the coffin of coexistence in the Holy Land."
Posted by Tony at 3:02 AM