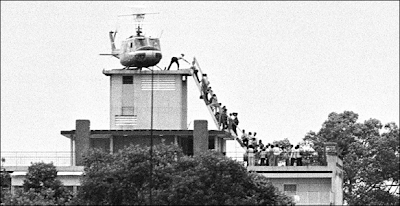 "In a remarkable parallel with a similar turning point in the Vietnam War 44 years ago, President Barack Obama will preside over a series of meetings in the coming weeks that will determine whether the United States will proceed with an escalation of the Afghanistan War or adjust the strategy to reduce the U.S. military commitment there.......

But the decisions that emerge from the coming meetings are more likely to be shaped primarily by the concerns of the military and the White House about being blamed for a defeat in Afghanistan that now seems far more likely than it did just six months ago.

In that regard, the approaching White House meetings recall similar consultations in June 1965, when President Lyndon B. Johnson and his civilian advisers responded to a request from Gen. William Westmoreland and the Joint Chiefs of Staff for a major troop increase in South Vietnam by discussing ways to limit the U.S. military commitment in South Vietnam.

Johnson, Secretary of Defense Robert S. McNamara, and National Security Adviser McGeorge Bundy were all doubtful that the war could be won even with a much larger troop commitment.

Johnson, like Obama today, also had an alternative to further escalation of the war – a proposal for a negotiated settlement from Undersecretary of State George Ball, which was strongly opposed by others in Johnson’s national security team, including McNamara.........

Gates, Clinton, and Holbrooke are likely to press Obama to go along with at least a large part of the McChrystal troop request, arguing that the war cannot be abandoned. They will argue that the Obama’s presidency cannot survive an open breach with the military, and that Republican senators are already poised to attack Obama as weak if he fails to provide whatever McChrystal requests.

Obama could still argue that conditions in Afghanistan have changed, and that U.S. objectives there must now be adjusted. But he would have to do battle with his military leadership, the Republicans, and his own national security advisers.

The high political price that the forces arrayed behind the war in Afghanistan are prepared to exact on Obama for reining in the present war may compel him to compromise with them once again. "
Posted by Tony at 3:08 AM