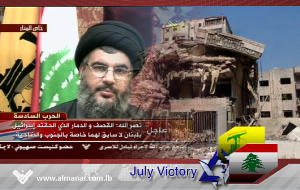 "15/07/2010 Four years after the building of Al-Manar Television was destroyed as part of the Israeli July 2006 war against Lebanon, the Resistance's voice continues to be one of the main targets for the Israeli enemy…

On that day in 2006, the Zionist entity leveled Al-Manar TV building in an attempt to silence the station during the war.

Al-Manar's broadcast stopped for less than five minutes and then resumed as usual from undisclosed locations, what perplexed the enemy who failed throughout the aggression to silence the "Station of the Resistance".

It was necessary for the Israeli enemy to silence Al-Manar for many reasons on top of which is Israel's endeavor to spare itself a media war that could eventually expose its crimes, save its already cracking community from another psychological war and inspire the Lebanese people with its steadfastness.

However, Israel failed in its strategy against Al-Manar with Israeli analysts and experts saying that the steadfastness of Al-Manar was one of the most vital factors that made the victory a reality....."
Posted by Tony at 3:47 AM