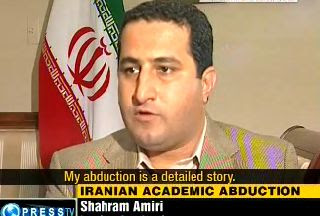 "Iranian national Shahram Amiri, who was kidnapped by Saudi and US intelligence agents last year, has left the United States for the Iranian capital, Tehran.

The Iranian scholar took refuge in Iran's interest section at the Pakistani Embassy in Washington on Tuesday, demanding an "immediate return" to Iran.

The embassy preserves Iran's interests in the United States, since the two countries have no diplomatic relations.

American officials had previously denied any knowledge of Amiri's whereabouts. Iran says Amiri was kidnapped and taken to the US while on Hajj pilgrimage in Saudi Arabia in June 2009.
Iran also says the CIA and Saudi intelligence agents were behind the abduction. Amiri has already posted two video messages online, revealing some details about his ordeal in the US custody.

In an exclusive interview with Press TV, Iranian academic Shahram Amiri told us more about his abduction:

Shahram Amiri: My abduction is a detailed story. In the video broadcast on the Iranian television, I have thoroughly explained key factors about how I was kidnapped.

In fact, in the video I managed to broadcast after escaping from the hands of the US intelligence with the help of my friends, I stressed that the video broadcast on Iranian TV is completely accurate and that it is not falsified.

I will briefly tell viewers how I got to Iran's Interests Section....."
Posted by Tony at 3:58 AM