US embarrassment in Iranian kidnapping 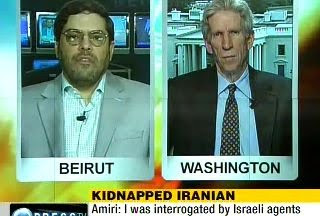 "Shahram Amiri has been a big name in Iran since he went missing in June last year. And he's been making headlines across the world over the last few days. He says the US abducted him and psychologically tortured him over the last 14 months. He's back in Iran now and has been telling his story.

Press TV has conducted an interview with Mohammad Marandi, a professor of American Studies at the University of Tehran, and investigative journalist Gareth Porter to learn their views on Shahram Amiri's case. The following is a transcription of the interview....

...Mr. Porter: Of course the United States has been guilty of kidnapping and holding people in detention in very harsh conditions, and even torturing people who they considered to be their enemies. In this case it seems to me that there is a particular instance where they thought he was a real asset. In fact, we haven't mentioned the fact that ABC news has reported that US intelligence officials are claiming that Amiri was a long term CIA asset inside of Iran reporting on the nuclear program for years. Now, I don't believe that for a moment, but I think they are putting that out in the hope of creating some kind of suspicion on the Iranian government towards Amiri because I think they now understand that they were taken in by him....."
Posted by Tony at 3:27 AM