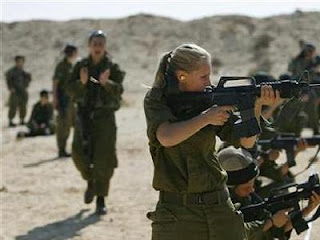 "It is called Spot and Shoot. Operators sit in front of a TV monitor from which they can control the action with a PlayStation-style joystick.

The aim: to kill terrorists.

Played by: young women serving in the Israeli army.

Spot and Shoot, as it is called by the Israeli military, may look like a video game but the figures on the screen are real people -- Palestinians in Gaza -- who can be killed with the press of a button on the joystick.

The female soldiers, located far away in an operations room, are responsible for aiming and firing remote-controlled machine-guns mounted on watch-towers every few hundred metres along an electronic fence that surrounds Gaza....

More than 40 countries now operate drones, many of them made in Israel, although so far only the Israeli and US armies have deployed them as remote-controlled killing machines. Israeli drones are being widely used in Afghanistan.....

Despite its diplomatic crisis with Ankara, Israel was reported last month to have completed a deal selling a fleet of 10 Herons to the Turkish army for $185 million."
Posted by Tony at 3:42 AM