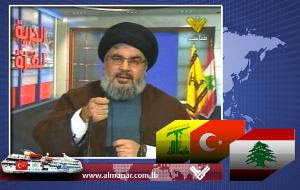 Hassan Nasrallah is the first Arab leader in 30 years to affect the Israeli public through his rhetoric, according to military intelligence report.

"A high-ranking Israeli intelligence officer says that Hezbollah leader Sheikh Hassan Nasrallah was the first Arab leader in 30 years who, through his speeches, had the potential to affect the Israeli public. The officer, whose last name cannot be disclosed, studied Nasrallah's speeches during the Second Lebanon War, which began four years ago today, in the course of graduate studies at the University of Haifa.

Colonel Ronen, the chief intelligence officer for the Central Command of the Israel Defense Forces, previously held senior positions in the research division of Military Intelligence. The study analyzed 10 speeches by Nasrallah that were broadcast during the 34 days of warfare. Nasrallah's only public press conference during the war was on the first day of war, immediately following the abduction of IDF reservists Eldad Regev and Ehud Goldwasser. After that he remained in bunkers, fearing an Israeli assassination attempt, and recorded speeches that were later broadcast by Arab television networks....

Nasrallah's speeches were widely covered in Israel during the 2006 war and drew harsh responses from senior political and military officials. Ronen says the rhetoric and content of the speeches were influenced by Nasrallah's understanding of the development of the war, based on information from the field. He argues that had Israeli decision makers analyzed these speeches in real time it could have altered the course of the war....."
Posted by Tony at 4:08 AM