Larijani blames US for terrorist attack 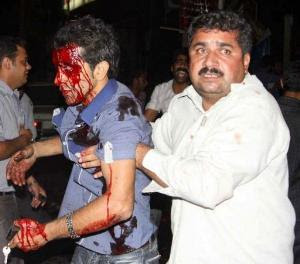 "Iranian Parliament Speaker Ali Larijani has blamed the US for the recent terrorist attack that left at least 27 dead in the southeast of the country.

On Thursday, two bombs were detonated in quick succession in front of the Zahedan Grand Mosque in the southeastern province of Sistan-Baluchestan. At least 27 people lost their lives and more than 100 others were injured in the incident.

"Americans should be held accountable for the Sistan terrorist attack," IRIB quoted Larijani as saying Friday.

The Iranian official further added that the deadly attack was carried out under the auspices of the United States. "The US cannot make up any excuses in this incident," he said, arguing that it was earlier proved that the terrorist Jundallah group, which has carried out many terror attacks in Iran, had close links with the US government.

Despite the US denial of any links with the group, Jundallah leader, Abdolmalek Rigi, who was arrested in February and executed in June, said in his confessions that he had received financial support form the US government.

Although Jundallah has claimed responsibility for the blasts, analysts say the group is unlikely to have carried out the attack since it was effectively disbanded after Rigi was executed in Iran last month. Extremist Wahhabis and Salafis trained by US intelligence agents in Pakistan are believed to have carried out the bombings. "
Posted by Tony at 7:37 AM