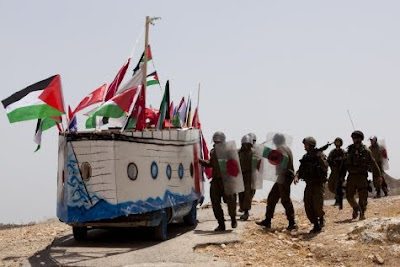 "Israel’s siege on Gaza essentially consists of one thing – surrounding the territory and controlling all exit and entry points. Logically, to break the siege you enter or exit the territory against Israel’s will. Exiting without permission is not an option, so on came the boats...

In theory it’s a simple, perhaps even genius idea....

The real success of the flotilla should be seen within a wider context. It has become the beacon of a non-violent form of resisting Israel’s occupation that is making huge strides.

The current boycott movement in the West Bank is attracting attention – it’s an embarrassment for Israel casting a shadow over the democratic, moral state it purports to be with many comparing this boycott to the divestment policy against South Africa during apartheid in the 1980s.

Events onboard the Marmara ended in bloodshed and violence but the theory behind the flotilla was logical and peaceful. Israel is a highly militarized state. Dealing with violence is what it knows how to do best. An Israeli soldier confronted by a man holding a gun moving towards him knows exactly what to do. But swap that gun for a banner saying ‘Free Gaza’ and the soldier will panic. He was trained for combat not crowd control.

And that’s why whether it’s a ship, a boat, a truck or a plane, both the success and the danger of this movement lies in the way it plays so simply to Israel’s weakest point."
Posted by Tony at 3:31 AM