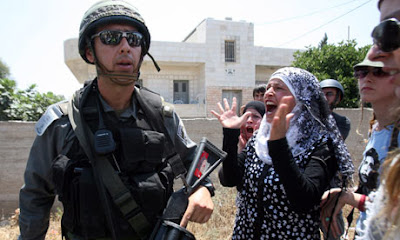 Rachel Shabi in Jerusalem and Peter Beaumont
The Observer, Sunday 11 July 2010
"An academic backlash has erupted in Israel over proposed new laws, backed by the government of Binyamin Netanyahu, to criminalise a handful of Israeli professors who openly support a campaign against the continuing occupation of the West Bank.
The Boycott, Divestment and Sanctions (BDS) campaign against Israel has gained rapid international support since Israeli troops stormed a Gaza-bound flotilla of aid ships in May, killing nine activists. Israeli attention has focused on the small number of activists, particularly in the country's universities, who have openly supported an academic boycott of Israeli institutions.....
Adi Oz, culture editor on the Tel Aviv weekly Ha'ir, appeared on Israeli national radio explaining her support for recent boycott activity. "When the Pixies cancelled their concert here I was disappointed," she says. "But I was not critical of the Pixies, I was critical of our government, because they are responsible for Israel's isolation." She adds that, post-flotilla, the cultural boycott is "something that everyone has a stand on – and some people are realising that they are in favour of it, without having thought about it before." There has also been a spate of boycott-related discussion in the financial press. The daily business newspaper Calcalist ran an uncritical profile of the Israeli campaigners behind Who Profits, an online database of Israeli and international companies involved in the occupation of the West Bank.
The project's co-ordinator, Dalit Baum, of the Coalition of Women for Peace, says: "Every day there is an article about this issue in the Israeli media, which creates a discussion about the economy of the occupation and raises the fact that there's a problem.""
Posted by Tony at 7:34 AM