Syria is yet to play its cards 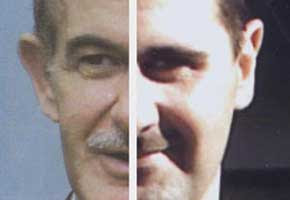 President Bashar al-Assad may not be the moderniser the west had hoped for, but his regime shows signs of progress

"Bashar al-Assad, Syria's president, can allow himself a moment of quiet self-congratulation this weekend when he marks 10 years in power. His father, Hafez, was a hard act to follow ....

Syria teems nowadays with western tourists who can enjoy boutique hotels in Damascus, puff shisha pipes in smart cafes and visit breathtaking sights from Palmyra to Krak de Chevaliers. The oldest capital on the planet now has a stock exchange.....

Still, Syrians like to point to progress: al-Watan has the distinction of being the country's only privately owned newspaper. It prides itself on being more critical than the turgid state media. The revealing snag is that it is owned by Assad's brother-in-law, one of the most powerful businessmen in the country.

Repression has returned with the usual suspects such as lawyers and human rights activists gaoled under emergency laws at the price of pro forma protests from the US and EU – still waiting for Syria to play those cards....."
Posted by Tony at 4:16 AM