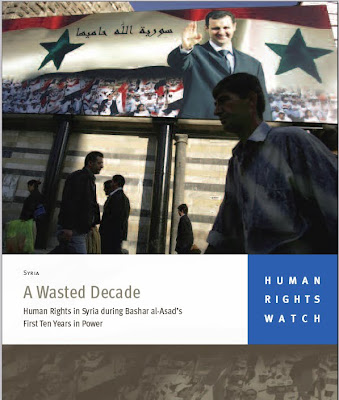 "(New York) - President Bashar al-Asad has not delivered on his promises to increase public freedoms and improve his government's human rights record during a decade in power, Human Rights Watch said in a report released today on the eve of the anniversary of his accession to power.

"Whether President al-Asad wanted to be a reformer but was hampered by an entrenched old guard or has been just another Arab ruler unwilling to listen to criticism, the outcome for Syria's people is the same: no freedom, no rights," said Sarah Leah Whitson, Middle East director at Human Rights Watch. "Al-Asad's record after 10 years is that he has done virtually nothing to improve his country's human rights record.".....

Syria's security agencies, the feared mukhabarat, detain people without arrest warrants and torture with complete impunity. Two years after prison authorities and military police used firearms to quell a riot that began on July 5, 2008, at Sednaya prison, Syrian authorities have not revealed the fate of at least 42 detainees, at least nine of whom are believed to have been killed.
Censorship is prevalent and extends to popular websites such as Facebook, YouTube, and Blogger......"
Posted by Tony at 4:08 AM