'Israel is US offshore base in Mideast' 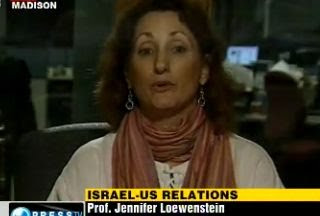 "Jennifer Loewenstein, an Associate Director of Middle East Studies Program at the University of Wisconsin, believes that the US policy towards Israel has not changed during Obama's term in office.

Israeli Prime Minister Benjamin Netanyahu says his recent meeting with US President Barack Obama shows their alliance hasn't frayed. He describes his visit to Washington as positive and productive.

The Israeli premier says Obama's policy toward Israel is the same as his predecessors.

Loewenstein believes that Obama is following the lead of previous US leaders in supporting Tel Aviv to make it an offshore US base in the Middle East.

The Wisconsin University professor stresses that bringing peace to the Israeli-Palestinian conflict has never been the US's agenda.

The following is a transcript of Press TV's interview with Jennifer Loewenstein....."
Posted by Tony at 3:03 AM