"They want us to be loyal to the occupation": Muhammad Totah interviewed 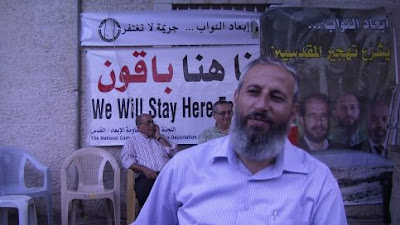 "On 9 July, as Israeli Border Police officers brutalized demonstrators at the weekly protest in the Sheikh Jarrah neighborhood of occupied East Jerusalem, forcing them away from a street where several homes had been seized by radical right-wing Jewish settlers, I visited the Jerusalem International Committee of the Red Cross (ICRC) headquarters just a few hundred meters away.

Though the din of protest chants and police megaphones could not be heard from the ICRC center, the three Palestinian legislators who had staged a sit-in there for more than a week to protest their forced expulsion from Jerusalem insisted that their plight was the same as the families forced from their homes down the street.

"All the Israeli steps in East Jerusalem are designed to evacuate Jerusalem of its Palestinian heritage," remarked Muhammad Totah, an elected Palestinian Legislative Council member who has been ordered to permanently leave Jerusalem by the Israeli government. "Whether it's through home demolition, taking homes or deporting us, the goal is the same."...."
Posted by Tony at 6:49 AM