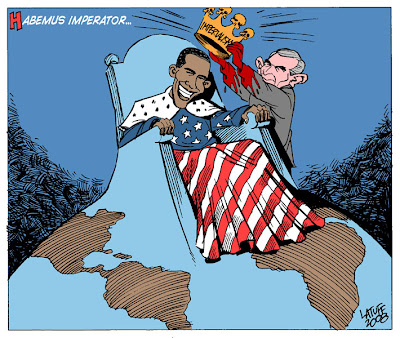 "........New lines are being drawn: on one side we have those who see government as the end-all and be-all of human existence, the savior and source of economic vitality, the motive-power of a nation. On the other side, we have a growing movement of those who challenge this premise, and see government as the Great Destroyer and enemy of freedom and prosperity. The former are bound to ally themselves with the War Party, which, after all, worships the State, while the latter – whether they realize it or not – are the War Party’s deadliest enemies.

This is why neocons like David Frum have taken to excoriating the “tea party” for wanting to cut government too much, too fast – because they know it presents an insuperable obstacle to their war plans. You can’t have an American empire without Big Government: you can’t have a far-flung network of overseas bases and client states without nearly unlimited funding to pay for it all. That’s why Frum disdains all attempts by the Tea Partiers to cut the size and scope of government, and why the Republican Establishment stands in mortal fear of the insurgency that threatens to take over the GOP.

The crisis of empire is the crisis of an America overextended on every front – and that includes the foreign policy front, as many Republicans and conservatives are now recognizing. The apocalypse the Establishment of both parties fears is upon us – and let us pray it comes swiftly and mercilessly. "
Posted by Tony at 4:10 AM