The dumping ground for despots welcomes another 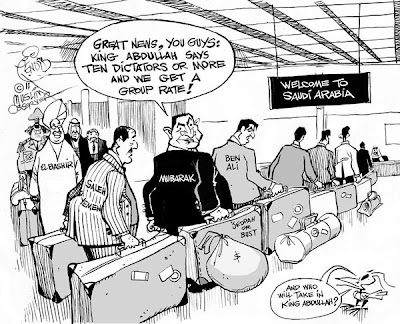 "Saudi Arabia is a great dumping ground for despots. Remember Idi Amin? We Brits loved him once, but when he turned against us and started eating his enemies – and keeping the occasional head in the fridge – we were happy he fled into exile in Saudi Arabia. Then there was Ben Ali of Tunisia who flew off to the kingdom with his wife and an awful lot of money this year when the people could no longer tolerate him. We used to like Ben Ali – the French more than others – because he was a "symbol of stability". And now Ali Abdullah Saleh – who also used to be our hero in the "war on terror" – is wounded in the chest and freighted off to hospital in Riyadh.

Yes, we're all grateful to the House of Saud when they take these rogues off our hands – when, of course, they have outrun their uses to us – especially when our demand for democracy fits rather uneasily with our continued sympathy for the local dictatorships. Ergo Syria – but let's not go into that right now. The US embassy in Sanaa may yet choose one of Saleh's family to continue his regime in the face of all the usual suspects (al-Qa'ida, separatists, tribal rivals, fill in the blank spots).

No, still we haven't weaned ourselves off the little Hitlers of the Middle East – which is why we go on supporting the greatest of all repositories for bad guys, Saudi Arabia itself....

The Saudis will be happy to keep Saleh because he wasn't much good at fighting Shias – the all-powerful enemy (I am looking through the corrupting spectacles of the ancient princes of the realm when I say this) of their Sunni emirs and caliphs. The same reason, by the way, why the Saudis invaded Bahrain to prop up the minority al-Khalifa Sunnis and help to bulldoze the ancient mosques belonging to the Shia majority under the preposterous excuse that they were invited into Bahrain to "keep order". I seem to remember some 20th-century Europeans who used similar arguments (one of them a fat Italian, the other a former corporal with a moustache). And like ourselves back in the 1930s, we say, well, they might be a force for stability, these chaps. None of this is worth all-out war. Which is why brave and democratic Obama didn't mention the plucky Saudis in his ridiculous peroration in Washington.

As for Gaddafi, you can see why he fights on. He could go to Burkino Faso, I guess, but he'll cling on to prove what a bunch of wombats Nato are – even if he ends up on the end of a rope. Three down, three to go (alas, I am referring to Bahrain). Then there's a seventh. No, of course I didn't say Saudi Arabia."
Posted by Tony at 7:53 PM