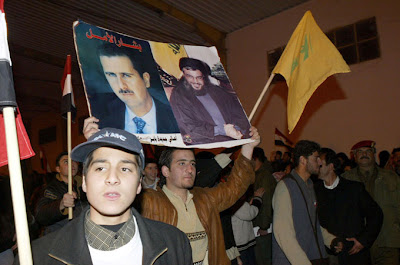 A VERY GOOD COMMENT
By Ahmed Moor
(Ahmed Moor is a Palestinian-US freelance journalist, born in the Gaza Strip and now based in Cairo.)
Al-Jazeera

"....On May 25 - one day after Hamza's body was released - Hassan Nasrallah, the leader of the Lebanese Hezbollah movement, delivered an address to commemorate Israel's withdrawal from most of southern Lebanon eleven years ago. During the program, he called on the Syrian people to support their merciless dictator and to enter dialogue with their illegitimate government.

The move was a surprising blunder on the part of the savviest and most popular Arab leader today......

When Mahmoud Ahmadinejad, the Iranian president, unleashed the forces of state repression against unarmed protesters in 2009, Hassan Nasrallah kept his distance. A Hezbollah spokesman perfunctorily announced that the Green Revolution was a product of Western meddling.

But more significantly, he stated that: "Hezbollah has nothing to do with Iran's internal affairs … We don't side with anyone. This is an internal Iranian issue.".....

In his speeches he seemed to understand that Arab public opinion tends towards justice and away from repression and mass violence. It seemed clear that he understood that the Arabs do not support Hezbollah because they hate Israel; the Arabs support Hezbollah for resisting Israeli tyranny and occupation. The evidence can be found in the self-referential language the Hezbollah militia employs; they call themselves "The Resistance".

In light of Nasrallah's behaviour in the past, his recent outspoken support for Assad gains greater significance. Surely, practical considerations would lead him to hope for Assad's political survival and continued patronisation.

But as with Iran, Nasrallah must know that Hezbollah will continue to enjoy support from Syria irrespective of who is in power. That is true even if the country democratises; ordinary Syrians strongly resent Israeli militancy and the occupation of the Golan Heights.

One thing, however, that can jeopardise Hezbollah's support among Arabs is the perception that the organisation endorses a regime which tortures children to death. Nasrallah may have other considerations in mind - the Special Tribunal for Lebanon; armaments against Israel; money for social programs - but those must be subordinated to the reality of Assad's Syria.

Today, the Arabs are enraged and revolted by the Assad regime. The torture, mutilation and murder of Hamza al-Khateeb has contributed to that popular sentiment. But so have the murders of more than 1,000 peaceful demonstrators since the pro-democracy demonstrations began. If he is wise, Hassan Nasrallah will distance himself and his movement from Assad and his death squads. No amount of political cover or material support is worth the association."
Posted by Tony at 4:22 AM