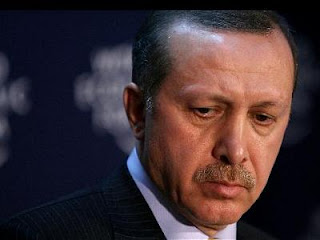 Erdogan has exhibited more courage and decency than any Arab leader, including those in the new Egypt and Tunisia!

Not a single Arab leader stood up and denounced the butchery of the Syrian regime; why?

Worse, Hassan Nasrallah is actually supporting the Syrian butchers; can you believe that?

"Turkey's prime minister has condemned Syria's crackdown on anti-government protesters as "inhumane'' and says Ankara could support a UN resolution against Damascus.

The semi-official Anatolia news agency quoted Recep Tayyip Erdogan as saying in an interview on ATV television late on Thursday that some images coming out of Syria were "unpalatable".

"Unfortunately, they [the regime of President Bashar al-Assad] are acting in an inhumane way," Anatolia reported on Friday.

"The savagery right now... think about it, the images they are playing in the heads of the women they kill is so ugly, these images are hard to eat, hard to swallow," Erdogan told Anatolia.

"I talked to Mr Assad four or five days ago. ... But they underestimate the situation," he said.

Erdogan described the treatment of the bodies of women slain by the security forces as an "atrocity".

He also said the brutal crackdown on protesters was "unacceptable".....

Erdogan reiterated that his country would keep the doors open for refugee waves from Syria, but asked, "How far this will continue?"

More than 2,500 Syrians have fled to Turkey and more are coming in to escape the unrest back home.

The arrivals have sharply increased since Tuesday, with most refugees fleeing the flashpoint town of Jisr al-Shughur, some 40km from the Turkish border, where tensions have flared amid accusations by Damascus that armed gangs killed 120 members of its security forces.

On Friday, the Syrian government sent troops to Jisr al-Shughur.

More than 1,100 civilians have been killed and at least 10,000 arrested in the brutal crackdown on almost daily anti-regime demonstrations in Syria since March 15, rights organisations say."
Posted by Tony at 4:35 AM